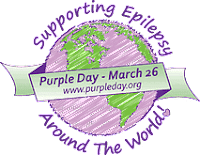 March is Epilepsy Awareness Month in Manitoba and across Canada and I thought this would be a good time to post a bit about this condition that affects one out of one hundred people (and three out of five in my immediate family). Epilepsy is a brain disorder that causes seizures. It is not a mental illness and it can be controlled with medication and in extreme situations, through surgery. Seizures can be the result of TBI (traumatic brain injury), tumours, stroke or infections like meningitis. Epilepsy also runs in families and up to forty per cent of cases are genetic.

In their zeal to create a perfect nation, the Nazis not only wanted to control race, but they also wanted to control hereditary diseases. In January, 1934, the Law for the Prevention of Hereditary Diseases came into effect, with amendments made in 1935, forcing doctors to expose any patients with reportable conditions. A court would then order sterilization.

People with possibly inherited deafness, homosexuality, anxiety and depression, bipolar, schizophrenia and a variety of other 'deviations', including epilepsy, were “to be rendered incapable of procreation.” But Nazi Germany was not the only country intent on forced sterilization. Eugenics was popular throughout the twentieth century in many parts of the world and it has always been the most vulnerable who’ve been at risk.

The consequence of an ill-timed seizure becomes a turning point in Tainted Amber, but it didn’t have to be. After all, the seizures in my family members have not prevented them from living full lives. During Epilepsy Awareness Month, I hope more people stop stigmatizing anyone who’s had seizures. We’re all worthy of life and love, and procreation should be a personal decision, not mandated by the zeal of a government focused on their idea of perfection.