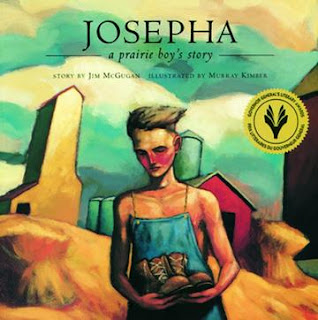 Josepha, a picture book (written by Jim McGugan and illustrated by Murray Kimber), is a 1994 Governor General award winner. (Originally published by Red Deer in 1992 and republished in 2012). It's a poignant story of a fourteen-year-old immigrant's shaming back in 1900 and it struck a chord with me. Even though I started school as a kindergartner, a full sixty years later, I still remember being shamed because of language and culture. I'd never considered how much more difficult it would have been for a fourteen-year-old.

The illustrations in this book, set on the prairies are full of deep, rich colours, always highlighting that 'land of the living sky' . . . so aptly expressed on Saskatchewan’s vehicle license plates.

The spread with the British flag on the schoolhouse especially resonates with me. What a British-influenced education it was for Canadian immigrant children, even in the more recent sixties. Along with the images, the actual words are emotive and insightful. My favourite ones: "But Josepha's face darkened. Lightless as the window in his family's sod shack . . . " and then, "This was the way for all of them, those older ones. One year, shamed. Maybe two. And then they'd be gone from class. They'd be gone forever."  I should pay more attention to picture books. Why should they be only for kids?

Volunteering with EAL students helps me appreciate the vulnerabilities of current immigrants and this picture book reminded me that shaming is current and that it can be crippling. No doubt shame has also impacted the Residential School survivors . . . with a history of being outcasts in their own country and it continues to be felt by newcomers who are, on the one hand, grateful to Canada for a safe life, but then shamed by their ‘otherness.’  Now, with the pandemic, there is a subtle shaming and discriminating against Asians, even here. Our country has opened its door to immigrants but we, as individuals, must be on guard not to let misguided fear close our hearts. The subtleness of shaming makes it a powerful and painful weapon. Some royal watchers might agree.