What do Ernest Hemingway, Thomas Mann and Helen Keller have in common? All three authors had their books banned and burned during the Third Reich’s campaign to control ideas through literature. Back in May of 1933, more than 25,000 books were burned during a one-day blitz by university students across Germany. Thousands more were pulled from circulation. Why were these writers so dangerous? 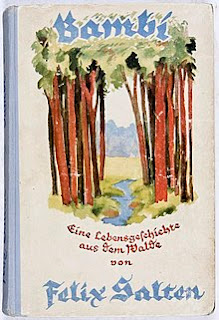 Hemingway?  His book, Farewell to Arms, showed the tragic side of war. For the Nazis, war was only positive.

Thomas Mann? Mario and the Magician warned about the dangers of dictatorship. Hitler saw democracy as weak.

Helen Keller?  Her book was How I Became a Socialist.  The blind and deaf activist supported the weak and the disabled. Nazis could not tolerate anything less than their idea of perfect.

And here’s a curious book that the Nazis banned:  Bambi written in 1923 by an Austrian called Felix Salten.  Two years later, in 1925, another Austrian publishes a book. It was called Mein Kampf.

Crazy? It happened in my parents’ lifetime. Nazi Germany was dominated by a culture of fear and mere words on a page could be dangerous.  It shows the power of books . . .

In Tainted Amber, Katya reads Thomas Mann, inspired by the idea that he wrote in his summer home on the Baltic Sea not far from where she sat reading his novella.