One of the Baltic ports that I didn't get a chance to visit back in 2019 was Baltiysk in the Kaliningrad Oblast. It's situated on a narrow spit, separated from the mainland by the Vistula Lagoon.

To visit Baltiysk (Russia’s western-most town, population ~32,000) requires a pass from the FSB (Russia’s Federal Security Service), so I didn’t see it, but I sure heard it.  As we cycled along the Baltic Coast, past Yantarny (former Palmicken) with its amber mine, we could hear nearby military hardware exploding and could feel it rumble the earth under our tires.

We got to within about ten kilometers of the militarized area, changing direction again when we got to Primorsk (the former Fischhausen). Hearing the explosions from such a distance was the closest I’ve been to such lethal weaponry and it made me shudder with a vague realization of war’s power.

Once known as Pillau, the Baltiysk port was renamed after the Nazi defeat. Originally a fishing village, it has a storied and much-conquered past. Swedes, Lithuanians, Teutonic Knights and pre- Soviet Russians all left their mark on the town. Located on the Vistula Spit, the Germans used it primarily as a harbour for passenger ships, (although it did have a sub building industry) with commercial shipping routed on towards the improved and expanded Königsberg (Kaliningrad) docks.

Back in the final months of the Second World War, Pillau was the coveted goal of many an East Prussian . . . people like my mom. Until the second half of January, 1945, civilians had been told to stay put and believe in the ‘final victory.’  Like me, she never got to see Pillau, now Baltiysk, either.  The Vistula Lagoon was mostly frozen in the winter of 1945. In the bottom photo, a fellow cyclist looks over the Vistula Lagoon towards Baltiysk.  This lagoon, shrouded in fog, was the slippery path forward for the desperate women and children. Many a horse and wagon crashed through the ice as the Soviet bombers strafed them from above. 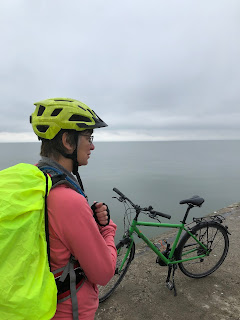 Of course, I had to explore this further by writing another book. Coming out next spring. More details available soon.