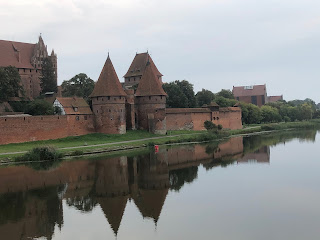 “Grosse Remter”—a beautiful meeting hall in the former Marienburg Fortress on the Nogat River in Malbork, Poland—was the inauguration site for select children when they joined the Hitler Youth at age 10.

The ceremony would be done annually as part of Hitler’s April birthday celebrations. The children’s voices would no doubt echo in the cavernous chambers as they sang the Nazi songs and pledged their allegiance to the Führer. Young girls, part of the BDM (League of German Girls) would fundraise to attend pilgrimages to the historic site. Being inside such an impressive and ancient Prussian castle would no doubt have had a dramatic effect on the children being inducted into the Nazi’s thousand-year Reich.

During the war, the Nazis used the castle as a prisoner of war camp . . . Stalag XXB.  Later, it was badly damaged in the final months of fighting.
The Marienburg/Malbork Castle—built by Teutonic Knights beginning in 1274—was rebuilt by Polish people.  It took until 2016 to finish the restoration as a UNESCO World Heritage Site. Now a proud part of Poland, back in my mom’s day, Malbork/Marienburg would have been considered part of West Prussia.
By 1945, the annual Hitler Youth celebration had to be transferred to the Reich Sports Field in Berlin. The impressive, historic Marienburg Castle was in ruins. Berlin was soon to follow.  Hitler’s 56th birthday on April 20th that year was not much of a celebration.

Old castles and history—the ingredients of a haunting experience. 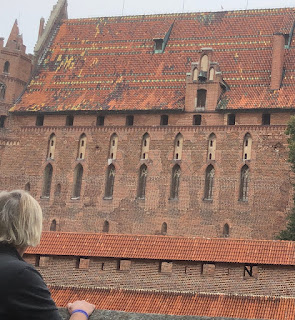