Science along the Amber Coast

Nikolaus Copernicus lived and worked in Frombork, Poland. Once known as Frauenberg, it's an idyllic small town on the Baltic’s Vistula Lagoon. I’d first heard about this astronomer and mathematician while studying Bertold Brecht’s play, The Life of Galileo, at university. The play had made a strong impression on me, as had Brecht’s connection to Berlin. I thought the Netflix series, Babylon Berlin, did a great job of revisiting the avant-garde atmosphere of the Weimar Republic. A communist sympathizer, Brecht left the Berlin theatre scene when the Nazis came to power. He returned to East Berlin after the war and was awarded the Stalin Peace Prize in 1954. 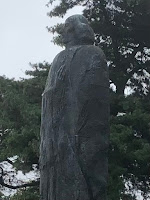 Copernicus, you might know, had the radical idea that it was the sun, and not the earth, that was the centre of our universe. While visiting Frombork, I was able to climb a watchtower, (refurbished after the Second World War bombings), from which Copernicus studied the sky and developed his revolutionary (in both senses of the word) astrological models. Our world, and the influence of the Church, would never be the same. 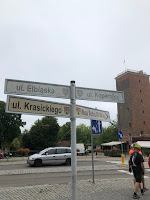 During that 2019 bike trip, I grew to appreciate not just the natural beauty of the Amber Coast, but how much incredible history is concentrated there.  No wonder its current residents embrace the past, showcasing it like a piece of amber.