Growing Up in the Shadow of War 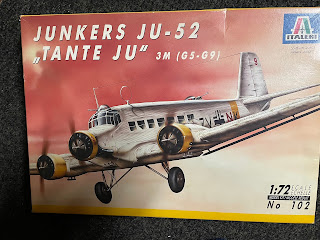 I was cleaning out some ‘stuff’ the other day. What might look like a box containing an old airplane model to others, is a poignant reminder of my dad and his years in the Wehrmacht. 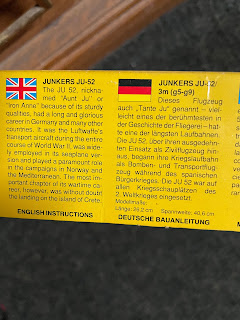 In 1936, age 18, he joined the Luftwaffe.  It gave him a smart-looking uniform, stability and status. When the war started he flew, among other planes, the Junker 52. According to the description on the model box, the plane was nicknamed “Tante Ju” or “Aunt Ju.”  It was a transport plane and when my dad crashed in 1941, he had 17 paratroopers on board. All died while he, as pilot, was the lone survivor, spending more than a year in the hospital. The crazy thing is that I only learned about this during the pandemic when my brother and I went for a walk. My brother said Dad always felt responsible for those 17 deaths on his plane.

You see, war talk was boy talk and so I never heard Dad’s war stories. While my brother and our dad focused on building model airplanes, I was learning domestic stuff like cooking and cleaning. The stories I heard were about the dangers of promiscuity, of unwanted babies, of disease-bearing fleas and bedbugs. I learned about recycling, reducing and reusing.

Growing up in the shadow of the war was not glamourous or monumental. It was shameful and quiet. As someone (Churchill?) so aptly noted, history is written by the victors.