When Gdańsk was Danzig 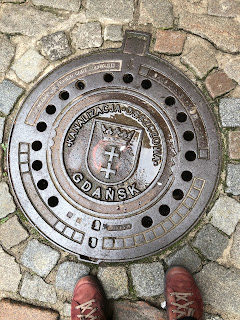 I’m reading a Second World War book structured through letters between two young cousins. Peter lives in rural Saskatchewan and Ulla lives in the city of Danzig (now known as Gdańsk). I love the contrast—along with the similarities—between the two children. What they share is the innocence of youth along with a common Mennonite culture. I’ve been reading a lot about Mennonites lately. It’s purely coincidence, but probably due to the many Mennonites that live here on the prairies and the many writers and readers amongst them. While my growing up experiences share many cultural aspects with the Mennonites, our family would never identify as such. Always on the outside looking in, that's me. 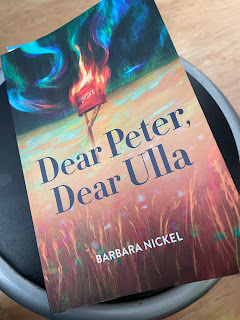 What caught my interest, specifically, about Dear Peter, Dear Ulla by BC author Barbara Nickel, was the German setting of Gdańsk (now a Polish city). Any time you visit a place, in person, revisiting it on paper makes for a stronger connection. I spent three days in Gdańsk at the end of my Baltic cycling trip and was enthralled with its history and beauty.Up until the visit, all I really knew of the city was its setting as the beginning of the end of Soviet communism. It was the Gdańsk shipyards where Lech Walęsa started the Solidarity movement in 1980 for which he received the Nobel Peace Prize in 1983.  It was a powerful experience to view his former shipyard office.

Now through Barbara Nickel’s book, centered around the 1939 Nazi invasion of Poland and the attack on the Polish Post Office, I’m learning more of the beautiful city’s brutal history.

Gdańsk still is a beautiful city. The old city centre has been meticulously restored. It was a delight to wander down its pedestrian friendly streets, hunting for that perfect piece of amber jewelry, admiring restored buildings, and stepping through century-old doorways. What a statement of pride . . . to rebuild, to remember and to honour the history of a place and its people. Gdańsk is like a piece of amber. Unlike Kaliningrad (former Königsberg)—which under Soviet control after the war, chose to demolish the ruins—Gdańsk has rebuilt and remembered.

I haven't been that far north in Poland yet, but whenever I see Gdansk in documentaries, it strikes me as an absolutely beautiful city. I once applied for a cat-sitting there, but I was not successful. :-(

By the way, thank you very much for your support for my blog!
A postcard is on its way, from one of those Polish-German towns, coincidentally...