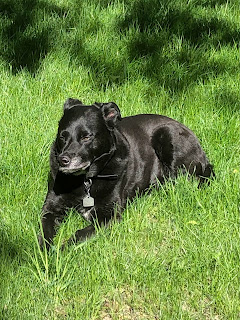 "German troops have attacked our country. . . Our cause is just. The enemy will be crushed. Victory will be ours." (Molotov,  June, 1941, from a loudspeaker broadcast throughout cities of Soviet Union after start of Nazi invasion, known as Operation Barbarossa)

"The army is working . . . do not panic. We are strong .  . . we are ready for everything and we will defeat everyone, because we are Ukraine." (President Zelensky, February, 2022 from a Facebook video post hours after Russia started full attack of Ukraine)

I’ve been reading about Dmitri Shostakovich, the Russian composer perhaps best known for his Leningrad symphony, and I had every intention of blogging about that this week, but the current news changed my direction . . . unfortunately.  Instead, let me share something about my pets.

I have a part lab, part pit-bull, black dog, and a short-haired, domestic grey cat. 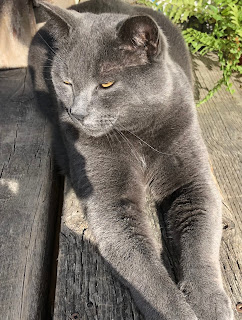 The dog is quite strong and could kill the cat who’s also rather strong, but still much smaller. In fact, when the two first became housemates, I was quite worried. However today, as I watch the dog, watching the cat calmly washing himself after eating his lunch, I’m assured that there is peace in our home. I stroke the dog and commend him on his manners. He cuddles against me with gratitude. The cat, done with his toiletries, tail high, marches off for his spot in the sunshine while the dog now heads to the cat dish, hoping for leftovers.

Mere might does not determine power. Why is there peace between my pet rivals? Why don’t I have to worry about the dog and cat having a war? They’ve learned to respect each other, even as I respect them. True, the dog could scare the cat away and eat all its food, rather than just licking up the leftovers. The dog could harm the cat just because he could. The cat knows this. I know this. The dog knows this. But what point is there in being a bully?

I don’t know what the dog is really thinking, but he seems to prefer love and respect from me and sometimes even tries to pay that forward towards the cat. (The cat, however, prefers a cooler distance.)

Like my dog, no one seems to know what Putin is really thinking. But if my dog and my cat can respect each other’s boundaries and live together in one house, why can’t Russia respect Ukraine?