In Crow Stone (coming out with Ronsdale Press this summer), the Soviets amass at the East Prussian border and, after a quiet Christmas full of foreboding, begin their invasion in late January. It’s 1945. There have been more than five years of war. The Third Reich, aggressor state, is tired and beat. Still. . .  surrender is not an option for its Wehrmacht . . . not as long as Adolf Hitler leads the country.

With trains overloaded and their schedules precarious, women and children travel by foot and wagon, hoping to avoid the powerful, revenge-seeking Soviet Army.

Fast-forward to February, 2022. While we watched, the Russian Army amassed troops for months along the Ukrainian/Russia borders. Instead of a foreboding Christmas, there’s a diplomatically-boycotted Olympics to watch. A few days later, the invasion begins.  Women and children now flee via car and on foot towards the Ukrainian/Polish border.

We in the West have been shocked out of our lazy democracies into a united front. Even conflict-shunning Germany has joined in. Can our world order be so quickly disrupted by one man? Yes. Stalin and Hitler have demonstrated the power of insanity. 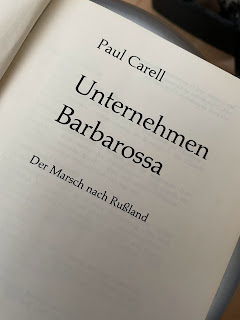 Back-track to June 22, 1941. The German-Soviet Non-Aggression Pact is broken when the Nazis invade USSR, under the code name, “Barbarossa.” Stalin, who’s killed off most of his best generals during the Great Terror of 1937/38, is initially in denial that it’s actually happening and in despair over his own naiveté. (Book: Unternehlmen Barbarossa, published in 1963)

History doesn’t repeat itself, but this is eerily similar to last century’s atrocities. Even the location is familiar. Poor, blood-soaked Ukraine. Victimized, again, and again! By communism, by Nazism, by Stalinism and now by Putinism. 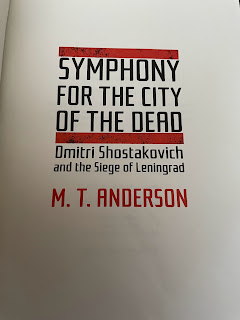 But also, poor ordinary soldiers, poor Russians, trapped by an authoritarian regime. I’m struck by the news clip of a young Russian soldier, being consoled by a Ukrainian woman who offers to phone his mother for him. He’s too emotional to speak.

I just finished reading M.T. Anderson’s Symphony for the City of the Dead. It focuses on the siege of Leningrad and the music of Dmitri Shostakovich. Powerful book, easy to read, many photographs, highly recommended.  Here’s a link to a short piece of his music written in 1943 during the siege.

And here’s a quote from an interview with the historian and Oxford University professor, Margaret MacMillan: “There are never exact parallels, and I always resist saying that history repeats itself. The times are different, the chronology is different, the political actors are different. In fact, history can’t repeat itself because we know what happened before, so in a way that affects the decisions we make now.”

Is that comforting or does that only stoke the fear shaking our world right now?