Three reasons I wanted to learn more about the hedgehog.

First, I just read an article from The Paris Review about a little boy refugee from Ukraine who could save only his toy hedgehog from his toy menagerie during a recent bombing. 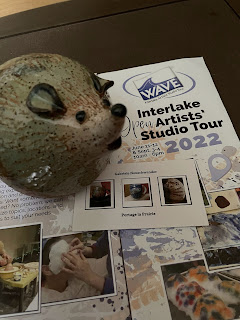 Third, I spotted a live hedgehog in the Zelenogradsk (Cranz) bushes during my visit to the Kaliningrad Oblast.

Three reasons that the cute little critters deserved some more of my attention. Here’s what I learned.

1. One of the oldest species on earth, found throughout Europe, eastern Russia, Africa and more. They are now considered an endangered species.

3. Night creatures who like to hide and dig under bushes. 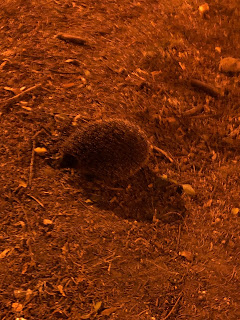 4. ‘Hedge’ ‘hogs’. Literally, that means, bush pigs. Moms are called 'sows' and babies are called ‘hoglets.’ Their name, however, is the only pig connection they share.

5. Though tiny (fit in your hand), they are not rodents and use their pig-like snouts for snuffling in the dirt for their insect diet.

6. A herd of hedgehogs?  That’s called a prickle! Some call it an ‘array’ but ‘prickle’ is much more fun.

8. While Shakespeare and Lewis Carroll saw them as evil, Beatrice Potter opened our eyes to their cute and cuddly side in 1905 with The Tale of Mrs. Tiggy-Winkle.  The character was inspired by the author's pet hedgehog.

9. The German word for hedgehog is Igel. And it’s as an Igel that I grew fond of them throughout my youth.

10. The German Grimm Brothers had a tale about a hare and a hedgehog.  It's the drawings in the link that remind me of my childhood readings.  The lesson to be learned is that it’s not  for us to be uppity and to judge a hedgehog for being a hedgehog.

Maybe we should all just embrace our unique selves and be proud of who we are. Pick your prickle with pride. For all the children refugees in Putin's 'war', let's believe that hedgehogs bring good luck!  Hug your hedgehog tight!