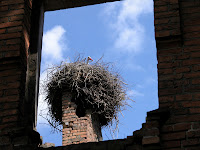 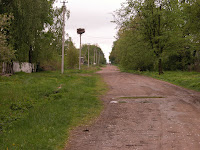 A stork brought my mom to the world back in 1919. Not impossible. Storks are big. Here's some interesting facts about these photogenic birds.
1. Their huge orange beaks are used to "shake a beak" which makes a clattering sound as they do a type of sword fight as they talk with each other. It's the only sound they make.
2. Storks are gregarious. That means they enjoy companionship.
3. Storks share in the parenting - taking turns during incubation.
4. Storks lay 1 - 7 eggs.
5. Storks eat frogs, reptiles, insects and mollusks.
6. Storks will normally build on the highest pole, roof or chimney around.
7. Storks will return to the same nest year after year.
8. Stork nests, made out of sticks, are huge - big enough for a real baby.
9. Male and female storks have the same coloring - with the male only slightly bigger.
10. Storks have long been a symbol of good luck.

My mother had a stork nest at her home when she was growing up. When I went back in 2004 there were no stork nests in Federofka - although some small villages, like Heimtal, still have these beautiful birds nesting on the hydro poles of their roads. It's a sad irony to think that more roads, more cars and more 'improvements' will continue to destroy the home of this ambassador of spring and new life.

If you want read more about the folklore associated with storks, click here.
at March 09, 2008

Gabe, this is just fascinating!