Politics and Music in Russia

I jumped at the opportunity to attend a concert last weekend ... 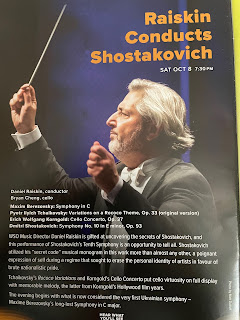 when I heard that it would be Shostakovich’s Tenth Symphony.
Having read Symphony for the City of the Dead by M. T. Anderson last winter, I’d gained some insight and curiousity about Shostakovich’s music and even streamed some of it to enjoy during my nightly dog walks. Anderson’s book highlights the composer’s experiences during the terrible siege and I found the Novorossiysk Chimes (The Fires of Eternal Glory, Op 111b) short and accessible for a non-classical mind like mine.

Listening to his Tenth Symphony, first performed December 17th, 1953 in what was then Leningrad (now St. Petersburg) opened my ears to what an immersive classical music experience can be. I couldn’t help but try to imagine the original audience. Leningrad was, after all, the city that endured horrendous suffering during the almost 900 days siege.

A quote by the composer (the validity questioned by some biographers), says, “I did depict Stalin in my next symphony, the Tenth. I wrote it right after Stalin's death and no one has yet guessed what the symphony is about. It's about Stalin and the Stalin years. The second part, the scherzo, is a musical portrait of Stalin, roughly speaking. Of course, there are many other things in it, but that's the basis." (From the book, Testimony by Solomon Volkov).

Even a great musician like Shastakovich had a shaky relationship with the Kremlin, as did everyone who experienced the perilous 30s and 40s in the Soviet Union. It was too easy to end up in some gulag or dead, like my grandfather during the 1937/38 Great Purges.