The Power of Chocolate 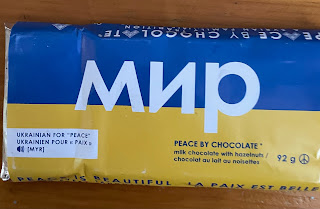 While visiting what was probably the last open-air farmer’s market of the season, I purchased a ‘peace by chocolate’ chocolate bar, designed with the colours of Ukraine’s flag. МИР it read or 'Ukrainian for Peace' and PEACE IS BEAUTIFUL in every language.  What a simple message sprawled in big letters on a hazelnut milk chocolate bar.  And yet so political!  Ukraine wants peace.

As I indulged in my guilty pleasure, I continued to peruse the package it came in. On the back, it read, “One PEACE won’t hurt.” Well one piece is never enough but more peace couldn’t hurt either. And then I did what every curious, chocolate-indulging writer raised on Nancy Drew would do … I followed up with some research.

Peace by Chocolate is a “Syrian Family Tradition.” The family behind this chocolate venture were Syrian refugees who came to Canada in 2012. You can check out their website and the beautiful people behind this chocolate for peace effort. The family came from Damascus and settled in Nova Scotia. It’s a wonderful immigrant success story and during this most volatile and violent of times, it’s a great reason to eat chocolate. Hopefully, ‘peace by chocolate’ during these polarizing times, won't cause too much weight gain or cavities.

My first book, The Kulak’s Daughter (aka Red Stone) revealed the power of chocolate while out in a desolate transition camp in Yaya, Siberia. In one scene an OGPU guard takes pity on the kulak children and offers them chocolate.

In Crow Stone, another guard (the OGPU morphed into the NKVD) shares chocolate with Katya, who’s now a prisoner of war. Here’s a snippet from the book:

“Eyes closed, I let the sweet dark square melt in my mouth as I remember how more than ten years ago, a guard named Sepp gave my little brother a piece of kindness. That chocolate is still melting, still spreading its goodness around.” (p. 174).

P.S. I didn't know until 2 days later, but October 28th was World Chocolate Day! Another reason to indulge.