Beach Weather and the Amber Coast

Back in the 1930s, over in East Prussia…how would one spend a steamy hot day in August? Well, you might end up in a coastal spa town like Rauschen or Cranz. Both of these towns have been tourist magnets for hundreds of years.

Cranz (re-named Zelenogradsk by the Soviets after the Second World War and also known by its Lithuanian name of Krantas) sits on the Baltic Sea, about 34 kilometers north of the former Königsberg (now Kaliningrad). This part of the Baltic coast is also called the Amber Coast. The name, Cranz, comes from the Prussian word for coast and was once considered a royal spa town. The sleepy little fishing village soared in popularity when Cranz got a rail connection to Königsberg in 1885 and its population reached about 6000 in the 1930s… doubling in size during the summer months. 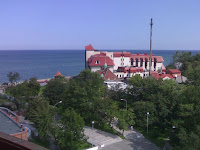 Along with the natural beauty and fresh air—tourists were treated to open-air concerts, dances, art displays and even fireworks. There were sailing regattas for boaters, equine events for horse-lovers, even gliding lessons for would-be flyers.

If staying overnight, a tourist could choose one of many bed and breakfast places, or stay in the Hotel Königsberg or Schloss am Meer (Castle on the Sea).

In 1946, the Germans were expelled by the conquering Red Army and without them, the tourism industry collapsed. With the disintegration of the Soviet Union, Zelenogradsk is once again a booming seaside resort, this time attracting wealthy Russians.

But if Cranz doesn’t appeal to you, you might—like the characters in my upcoming novel Amber Stone—consider a visit to Rauschen (now Svetlogorsk), high on the cliffs of the Amber Coast.  It’s down the coast from Cranz, 39 kilometers northwest of Königsberg and about twice the size. Rauschen was a tourist destination even before the railway which connected it to Königsberg in 1900. It became Svetlogorsk in June, 1947 and, like Cranz, continues to be popular with Russian tourists. (photo: Vladimir Sedach)

Today this Amber Coastline features two UNESCO World Heritage sites containing some of world’s largest sand dunes. It celebrates not only physical beauty, but teems with biodiversity…quite possibly Europe’s only remaining true wilderness.
Both these towns are on my travel bucket list. For now, I can visit them only through my imagination.  Of course if I do visit, they won't be the same beach towns that existed when my characters passed through. Time-travel happens only through books.

1929 Nobel Prize winning author, Thomas Mann, liked these Baltic beaches too.  “They walked, and the long waves rolled and murmured rhythmically beside them; the fresh salty wind blew free and unobstructed in their faces, wrapped itself around their ears, and made them feel slightly numb and deliciously dizzy. They walked along in that wide, peaceful, whispering hush of the sea that gives every sound, near or far, some mysterious importance.”
― Thomas Mann, Buddenbrooks: The Decline of a Family