Who doesn’t like spending summers at the beach? Life is short, and summers even shorter.  The 1929 Nobel Prize winning author, Thomas Mann, liked to spend his summers on the Baltic, in Nida with his young family. The beach town is on the Curonian Spit, a narrow piece of sandy land jutting out into the Baltic Sea. His summer home at 17 Skruzdynės Street has now been turned into a museum. Not only is his house a museum, but the Nida community supports an artists’ colony just like back in the early thirties. 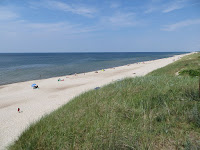 Nida (called Nidden by the Germans), with less than two thousand inhabitants, was much smaller than the mainland tourist towns, formerly called Rauschen or Cranz back in the '30s. While the names have changed, sand dunes still range up to fifty meters high.   (Photo: Bernd Rostad http://www.flickr.com/photos/brostad/9614129325)

The town first attracted writers back in the 1800s. Soon they were joined by other artists and intellectuals, especially those from nearby East Prussia.  I'm certain that my character, Katya, would have loved to have been a student in this colony. After all, she didn't live too far away and she'd read Thomas Mann's novellas. But Mann left the area in 1933 after his books were banned by the Third Reich. A few years later, during the war, his summer home became a retreat for convalescing Luftwaffe pilots. (Would it be possible that my own father spent time there, healing from his 1941 plane crash? I somehow doubt it...he was rather low-ranking, but I'll never know.)

After Lithuanian independence in 1991, the Nida Art Colony (NAC)  has been revived. May the sand dunes, the Baltic waves, and the wind continue to inspire art. It's inspiring me...and I've not even been there.
at August 12, 2017

Would love to have an Anitas writing retreat there!