Sandy Beaches on the Baltic

The Curonian Spit and the Vistula Spit…rich in history and natural beauty. 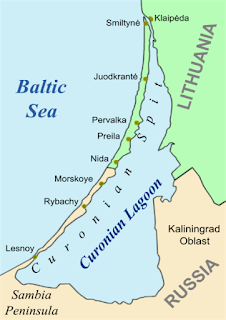 These two narrow spits of land—massive sandbars—in the Baltic near Kaliningrad, are shared amongst three countries. Both spits create lagoons. In January, 1945, when the weather of these unique beach areas was at its worst, German civilians struggled to flee the Soviet Army by crossing the lagoons to ships in harbor on the Baltic.

Curonian Spit
This is a 98-kilometer long, crescent-shaped, sand-dune-covered finger of land. Since 2000 it’s a UNESCO World Heritage site, and both Lithuania and Russia, who share the spit, have formed national parks…Lithuania on the northern half, and Russia to the south. (The Thomas Mann writing colony, Nida,—on the Lithuanian side—is the largest town). Tourism is carefully monitored to protect the fragile eco-system of the area.  (Map: H Padleckas)

The Curonion Spit (German: Kurisches Haff) harbours a fresh-water lagoon, known as the Curonian Lagoon, with the Lithuanian port city of Klaipeda at its northern tip. At its widest point, the spit stretches almost 4 kilometers, near Nida.  A single road runs the length of the spit, from Zelenogradsk in the Russian Obast of Kaliningrad, (German: Cranz) to Klaipeda (German: Memel), which is accessible only by ferry across a narrow strait. (Photo: A. Savin). 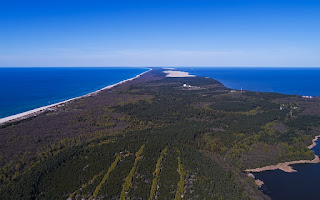 The Parnidis Dune is the largest dune on the spit at 52 meters high. Climbing is allowed only on designated paths to prevent too much sand movement. (Dunes by their very nature are always moving.)

The Curonian Lagoon is home to diverse plant and fish life, which is threatened by pollution and algae blooms. (Like our own Lake Winnipeg.)

The area is at risk also because of natural threats like storms. In 2004, Russia began offshore oil drilling off the coast of the Curonian Spit which will further threaten this pristine natural setting.

Vistula Spit
Not much further down the Baltic coast, is the Vistula Spit. This peninsula, separated from the mainland by the Strait of Baltiysk (German: Pillau), is only 600 meters wide in some places. It shelters the Vistula Lagoon (German: as Die Frische Nehrung).  The Vistula Spit is divided between the Kaliningrad Oblast, and Poland and thus contains Russia’s most western point. 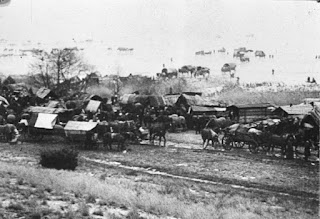 Poland plans to build a ship canal through the Vistula Spit to the Baltic.  The spit’s major tourist town is the Polish community of Krynica Morska (German: Kahlberg).

In the closing months of the Second World War, Germans attempted to cross the Vistula Lagoon in order to reach ships waiting in Baltiysk (Pillau) harbor. Soviets bombed the frozen lagoon making the crossing impossible for many women, children and horses. My mother was one of those attempting this risky escape. (Photo: German Federal Archives)

These beautiful, sand beaches have known their share of war and death. Beaches all over the world have welcomed invading armies or fleeing ones (I need to see the recent Dunkirk movie).