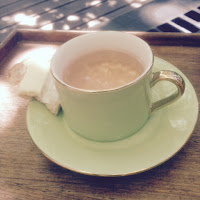 I went for coffee on Sunday, after my book signing out in Transcona…a part of the city so far from where I live…it feels like another city. While out there, I met a friend of my parents­…a recent widow who seems to appreciate my company once in a while. I, in turn, enjoy connecting with someone who shares memories of my parents. A little German baking adds to the appeal. The fresh ground coffee and home-baked streusel kuchen with whipping cream was wonderful. But what made this visit especially delicious, was her company. Here I am researching about East Prussia during and after the war, and at this kaffee klatsch were two people who'd lived through it. My friend’s guests each had fascinating firsthand accounts of surviving the Second World War. Doing a quick blog post certainly doesn’t do them justice. So this this is just a summary of two incredible histories that I had a glimpse of yesterday, over coffee.

The older gentleman, still recovering from recent hip surgery, told of how he was sent to East Prussia as a child to escape the Allied bombing of Berlin. By January, 1945, of course, East Prussian civilians were fleeing by the millions from the Soviet attack. As a youngster, he came very close to becoming one of the 'wolfs-kinder'—who hid in the woods and lived off scavenged foods.  It was pure serendipity that led to an aunt claiming him. Otherwise, he too, would have been forced to be on his own, like many of his fellow child refugee orphans...some of whom grew up never knowing who they really were.

His wife, also survived the East Prussian flight (see the controversial movie "March of Millions")  when she was not quite six years old. Her father happened to be the locomotive engineer, and he insisted that she and her siblings board a freight train—the last train running through the (then) German city of Allenstein (today Polish and called Olsztyn) back in January, 1945.  While she escaped the front, but there were still years under Soviet occupation ahead of her before she came to Canada.

We sipped our coffee and dug into our streusel kuchen. War stories. Memories. History matters. And then the conversation slip-slided into current politics…
at August 28, 2017