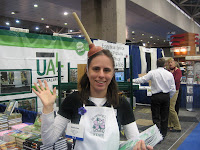 Before tucking my Dallas images into my photo folder and moving on, I'll share a couple more photos. Here's one of my new editor, Madeline Smoot, from Blooming Tree. Seeing an editor wearing a plunger on her head can mean one of two things, a) she's a tad strange, or b) she goes all out for the books she works on. Having had a chance to share dinner with her, I can say with confidence that it's b) and not a). The plunger has all to do with BTP's latest release about a penquin, called Patrick the Somnabulist by Sarah Ackerly. Cute book. And I love that big word. Kids will, too. 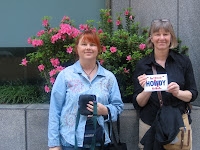 Here's a stock tourist photo of me and Linda proving we really are in Texas - where flowers bloom in April - like they should! Have I mentioned all of Linda's books? She's very prolific. I really enjoyed the feisty and psychic Sabine, her main character of the Seers series, published by Llewellyn.


Last but not least, here's my brush with fame. A photo of the one and only, Gordon Korman. 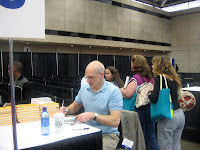 My oldest daughter grew up devouring
all his books - especially the Bruno and Boots ones. Here he is signing his recent release, Schooled. When did he begin his prolific career? Was it fourteen? No, in fact he was twelve!
In this photo he looks totally human - I mean he doesn't look like the legend he's become. (How do living legends look, you ask? Don't know - maybe I expect this aura around them - that radiates energy.)

Back to my own writing. The grind of creating - of revising and
of polishing. Must focus.
at April 26, 2008

You look really happy at the Conference Gabriele. Glad you had such a good experience! ~Sara